Imagine if we had to carry a trail of all things we have ever thrown away--we would barely be able to take a step. According to Grownyc.org, New York City alone “throws away 400,000 tons of recyclable paper, that’s enough to fill the entire Empire State Building.” Moreover, an average American produces about 4.43 pounds of waste every day, of which less than a quarter is recycled. The municipal solid waste generated includes waste produced from households, hotels, offices, stores, schools and other institutions. Of the places that generate waste, schools and offices are the two which communally generate and dispose of and recycle waste.

How can schools initiate a Waste ReductionProgram: 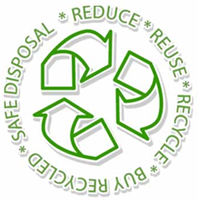 Keeping in mind the motto to "Reduce, Reuse, Recycle & Buy Recycled", any school can initiate and effectively implement a waste reduction program and reduce waste generation significantly. Since waste is generated communally in school, it should be reduced using the collective efforts of the staff and students. School officials have an important role to play here as they have an opportunity to influence many lives around them. Teaching the importance of waste reduction can help students make wise decisions in their personal lives as well.

What constitutes a Waste Reduction Program?

Any waste reduction program fundamentally depends on four rules. School faculty should first learn and then educate their students of these four rules of waste reduction,as specified by the U.S Environmental Protection Agency. 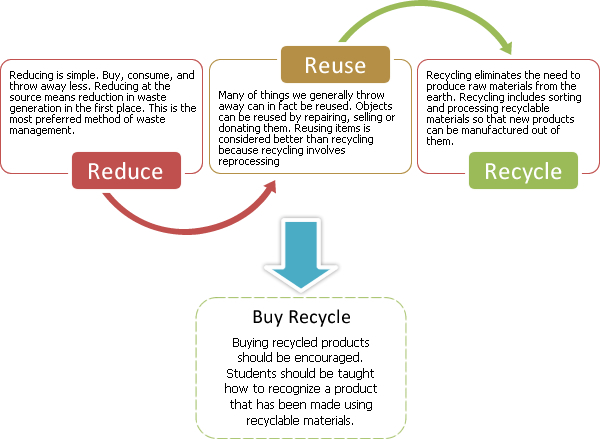 Another important thing to remember before schools begin the program is that no two waste reduction programs are the same and school officials should practice what is best for their respective schools while adhering to relevant policies. These policies will depend on the state your school is in. For instance,public and private schools, and any other educational institutions in the state of New York,are required to recycle materials accumulated in their local recycling program. According to the Solid Waste Management Act of 1988, “Schools must recycle right along with other municipal agencies, residents, and businesses.” It is also a good idea to check the kind of waste your municipality recycles. New York, for instance, has sufficient provisions to recycle paper, but does not recycle all kinds of plastic. “Plastic bottles and jugs (no caps) are the only plastics accepted in NYC’s recycling program” as per grownyc.org.

Steps to follow to implement a waste reduction program:

Additional Steps to Take to Recycle in Schools: